This series should be read in order.

Marin McLeod woke up a week after graduating law school as a vampire.

Not when her human friends are off-limits, and the immortals she knows are centuries older, wiser, and terrifying. Not when said immortals are so beautiful, she can’t help but feel like an ugly duckling.

Certainly not when her cheating ex-boyfriend is horrifically killed, turned into a vampire, and is sexier than ever…and is determined to get a second chance.

And absolutely not, when her boss’s, boss’s, boss shows up in New Orleans to investigate her new family’s alleged crimes, and insists she work as his assistant. Not when failure means the people, she’s come to love, will be sentenced to death.

You’ll adore this urban fantasy series, because everyone loves a tale of an underdog saving the world…with a little help from her cheating ex.

Three years had passed since the day Marin had died. Three years of learning everything she knew of the world was only half-true.

Since childhood, Marin had wanted to be a lawyer like the ones on television—elegant, eloquent, and smart. She’d imagined the prestige of beautifully cut black suits, with her hair pulled into a bun or around her shoulders, so she could flirt with co-workers after a hard case. Against all odds, she’d gotten into the right schools, met the right people, and graduated at the top of her class at Tulane Law.

Marin would never be a lawyer. Instead, fate had made her a judge.

Not a judge who wore black robes and smacked a gavel. She’d become a judge who hunted down villains in dark alleys and used touch or blood to learn their secrets. Her court of law had no legal maneuvering or last-minute witnesses. It all came down to remorse. If they showed remorse, there would be mercy. No remorse and Marin would pass judgment, up to and including the death sentence. The convicted had no hope of lengthy appeals processes. Here, guilt meant “Do not pass go, do not collect two hundred dollars, go straight to Hell.”

For the first time in two hundred years, the High Judge of the Order of the Sinistra Dei had come to New Orleans. He claimed the visit was of a personal nature, but she didn’t believe in coincidences, not after everything that had happened.

Marin climbed out of the car in front of the Notre Dame Seminary. The air left her lungs like a sucker-punched boxer. I can do this—I have to. The fates of the ones she loved rested on her shoulders.

“Miss McLeod?” A priest met her at the door.

She plastered on a smile. “Yes, I’m here to see the representative from the Vatican.”

“Please come with me.”

“Thank you.” She followed him through ornate halls to the residence of the Archbishop and into an office.

A man sat, flipping through pages in a binder. “Marin McLeod, I presume?”

“I am the High Judge, Lysander. You will be assisting me during my time in New Orleans.”

“Please, sit. You may address me as Lysander.” His smile softened the lines of his face and lit his eyes.

Marin sat on the edge of her chair. She hadn’t known what to expect, but she’d never imagined the High Judge as handsome or personable. “I understand you’re here on vacation?”

Lysander tilted his head. “Not exactly. I’m here to investigate some oddities that came to my attention. Were you in the French Quarter the night of Fat Tuesday?”

“No, I was with my commander.” Her heart sped. “May I ask which oddities?”

Lysander smiled. “Seems as though there were seismic activities that night.”

“The sinkhole and a minor earthquake?”

“I am more concerned with the after-effects. Our scientists have confirmed the Americans’ findings. Large amounts of poisonous gasses were released into the atmosphere when the sinkhole in Jackson Square formed. They agree that this caused the brief loss of consciousness in some people in the French Quarter.”

“A lot of people were hurt that night. The damage to Jackson Square is heartbreaking, but I’m surprised the Order is interested in such things.”

Lysander flipped through the report. “Earthquakes and sinkholes don’t explain the images that have surfaced on the internet.”

He slid several grainy images of a winged female across the desk. Some of the pictures showed this woman fighting a huge, demon-like male.

The clutch is in serious trouble. She smoothed her expression. “It looks as though it was very foggy that night, not to mention it was Fat Tuesday in the French Quarter. Can we put much stock in photos taken by intoxicated humans?”

“The Order fears this is a blatant disregard of our laws. More so, when one of our own is presenting themselves as an angel.” Lysander studied her expression.

“They wear costumes to celebrate Mardi Gras. Some are very elaborate.” Marin held her ground.

“I don’t think the people in the photo are wearing costumes.”

She grinned. “Do you honestly believe there was some sort of supernatural battle in New Orleans?”

“It doesn’t matter what I believe.” He glanced away, but not in time to hide the flash of emotion in his eyes.

Rumor had it that Lysander predated Christ. Marin supposed, in all that time, he could have crossed paths with winged immortals.

Lysander pointed to one of the clearer images. A large figure hovered over the roof of the Old Ursuline Convent. “This picture clearly shows a demon above the roof of the convent building. The very spot that is now severely damaged.”

“With all due respect, that looks like a storm cloud and a play on lights.” Marin folded her hands. “Perhaps the photo was altered. They can do amazing things with graphics programs these days.”

“Perhaps—but what of this one?” Lysander pulled out a photo of Gia with large wings. Bruises distorted her face and blood stained a broken wing.

“As I said, costumes are common during Mardi Gras.”

“That is a rather convincing costume.” Lysander sat back. “Miss McLeod, do you recognize the woman in the photo?”

A rivulet of sweat ran down her chest as she examined the picture. “I can’t be sure…”

“I am surprised she has fallen. She struggled early on, but she became quite the warrior.”

“We will begin an investigation immediately.”

Marin bowed her head. “Will this be a formal inquisition against the New Orleans clutch?”

“At this point, I see no reason to involve anyone outside of this room. Since you are a member of the clutch, we should be able to get to the bottom of this quickly. When I have the information I need to file charges, I will notify the Grand Master and arrange for a formal inquiry.”

“You expect me to work alongside you while you investigate my clutch? They’re my family.” Why me? He has hundreds of immortals to choose from, all with more experience.

“I do and you will. But first, I must have your vow that you will maintain strict confidentiality regarding my purpose and what you learn here.”

Marin made the sign of the cross and placed her hand over her heart. “As a member of the sacred Order of the Sinistra Dei, I solemnly swear to maintain confidentiality regarding your purpose and any information gathered during the course of the investigation.”

Lysander’s smile made her uneasy. He had her swear an oath, an oath she planned to break as soon as he released her for the evening.

I have to warn Gia.

“May I ask what the penalty will be if you find proof to charge Gia?”

“The Grand Master will revoke her service to the Order of the Sinistra Dei. She will from then on be known as Execrati and sentenced to death.”

Brutal, cruel, tender and sexy - A story of choices and long-lasting consequences of frivolous decisions and the impact of your choices on those you love. ★★★★★
-Amazon Reviewer
An enjoyable and sexy vampire novel with a new twist, great defined characters, and gorgeous descriptions. If you're a fan of the original few Vampire Chronicles or first sixish Anita Blake books, this is definitely something you'd enjoy!
-Amazon Reviewer
This promises to be one highly addictive series!! It's one riveting and thrilling suspense filled novel. Add in a love that is both rocky and everlasting and you have a series that captures your heart.
-M. Fritz
If you are a fan of vampire novels then I highly suggest you grab this book. It has so much uniqueness to it and it will keep you entertained to the end. I can't wait to learn what happens next!
-Seraphina
Previous
Next 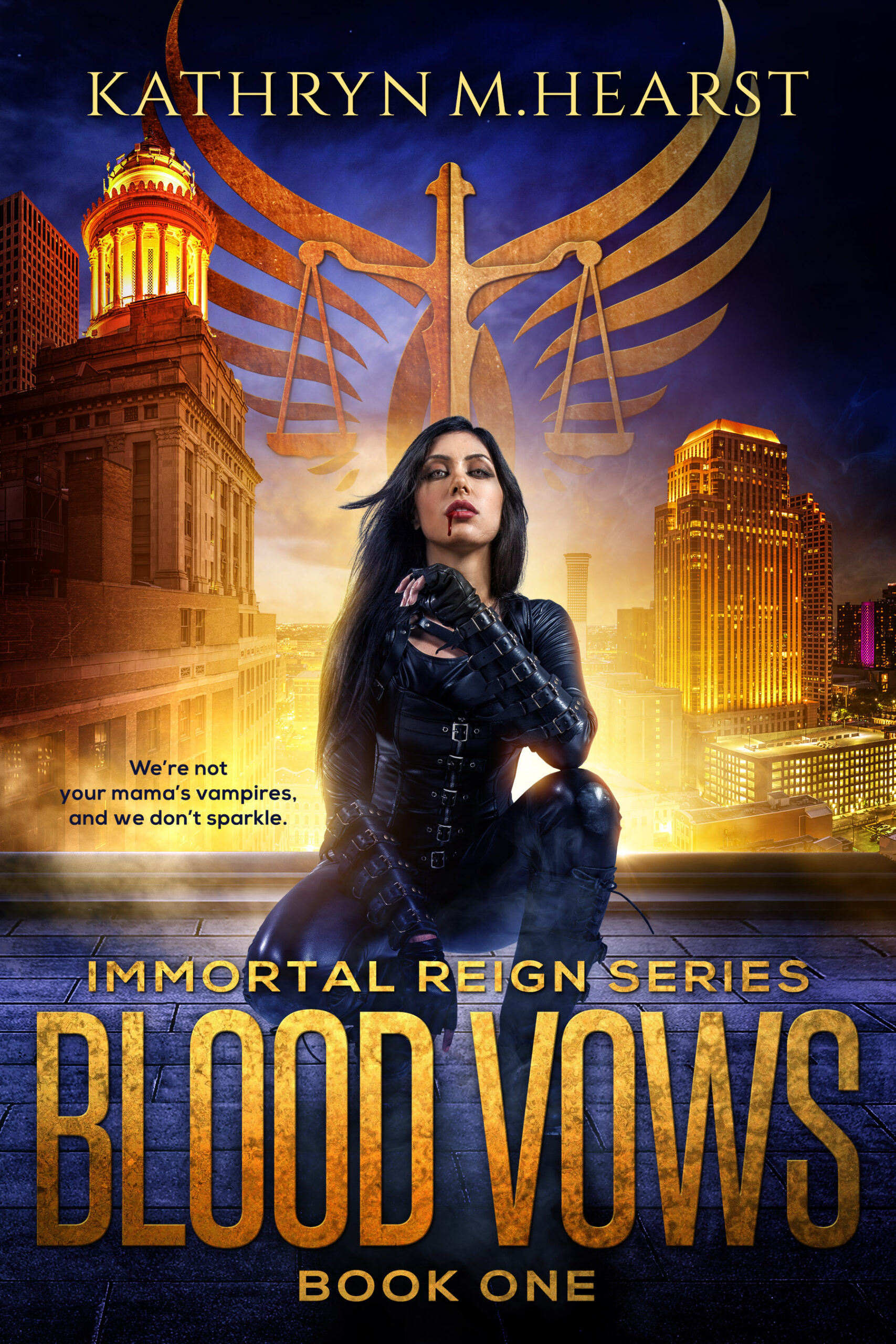 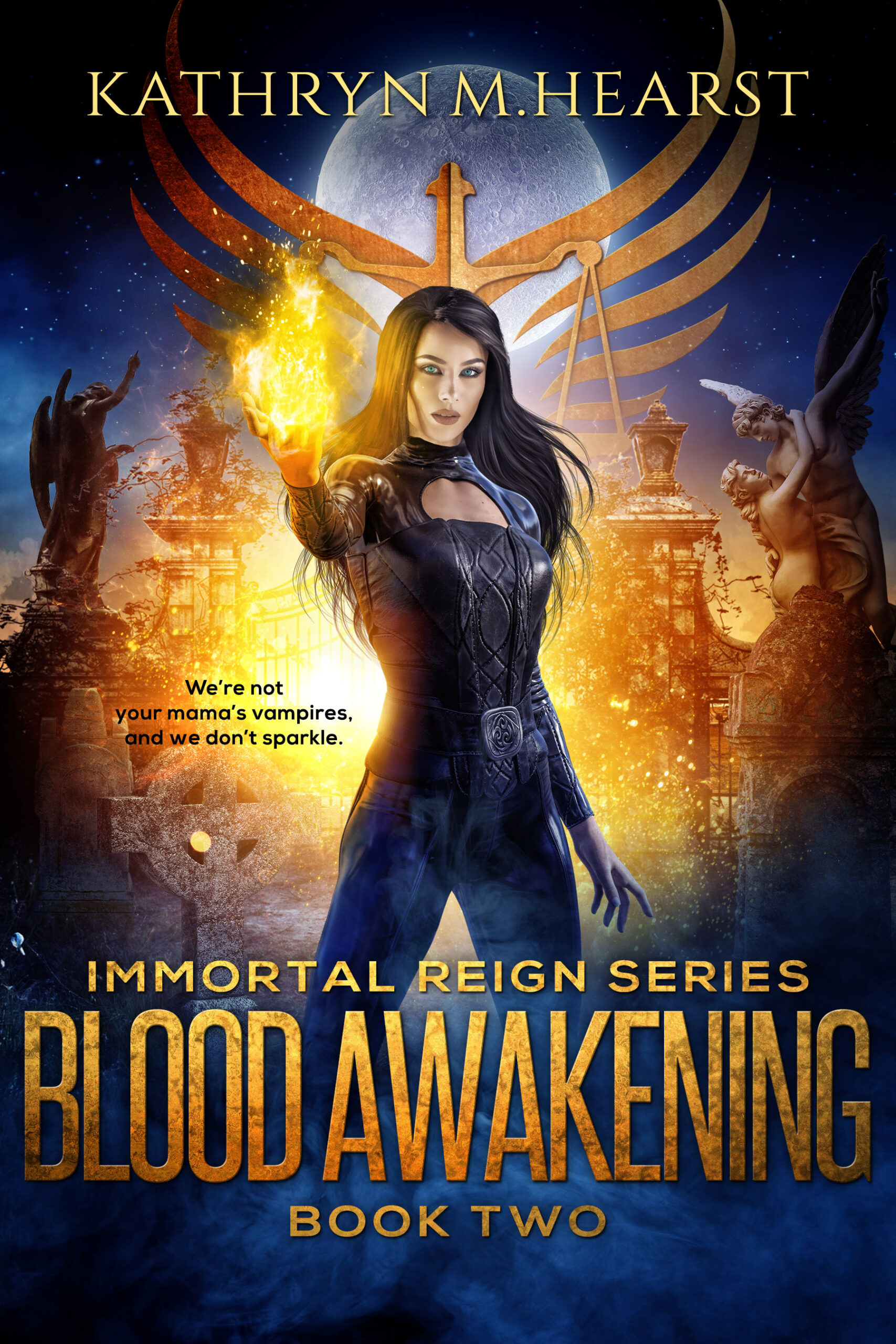 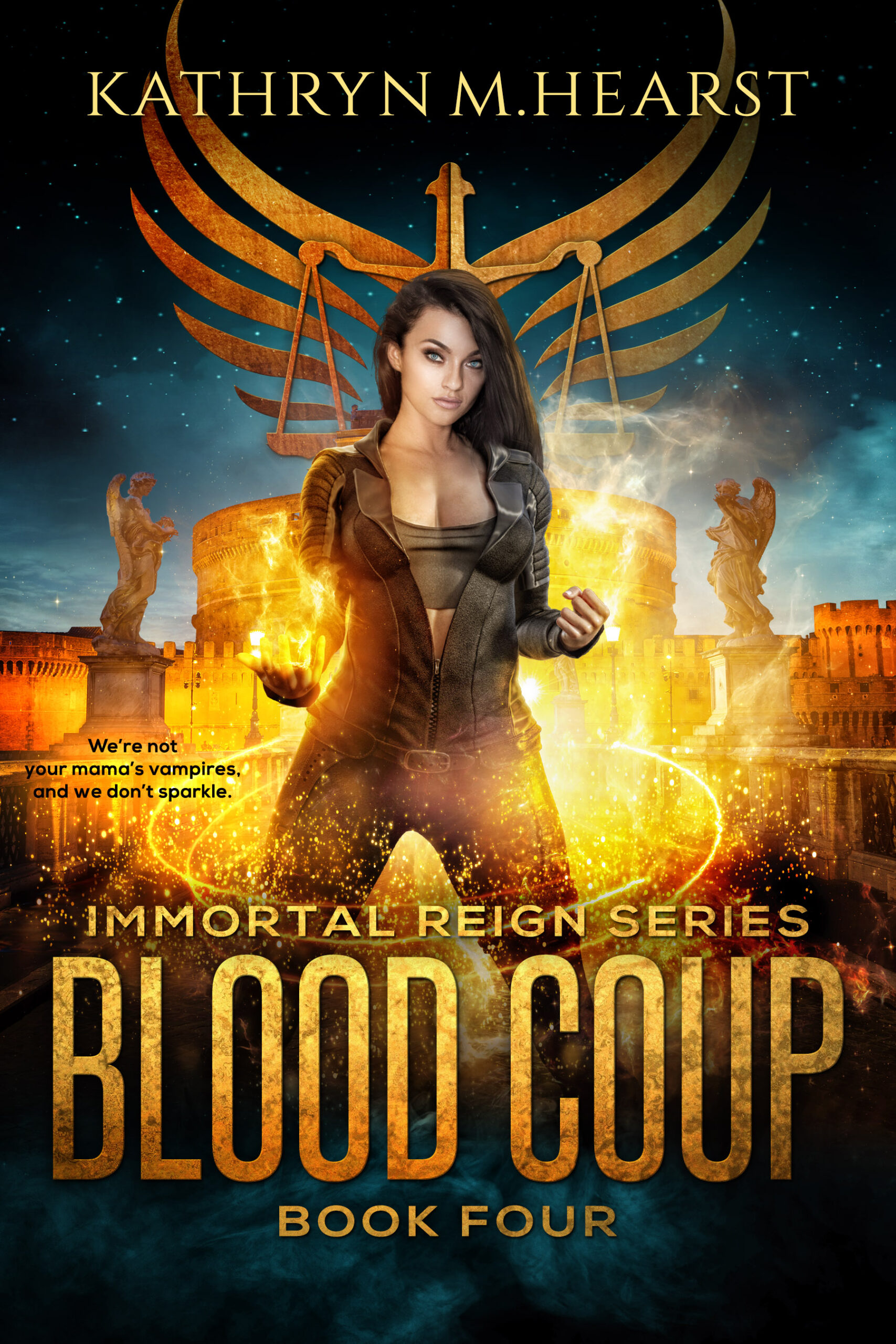 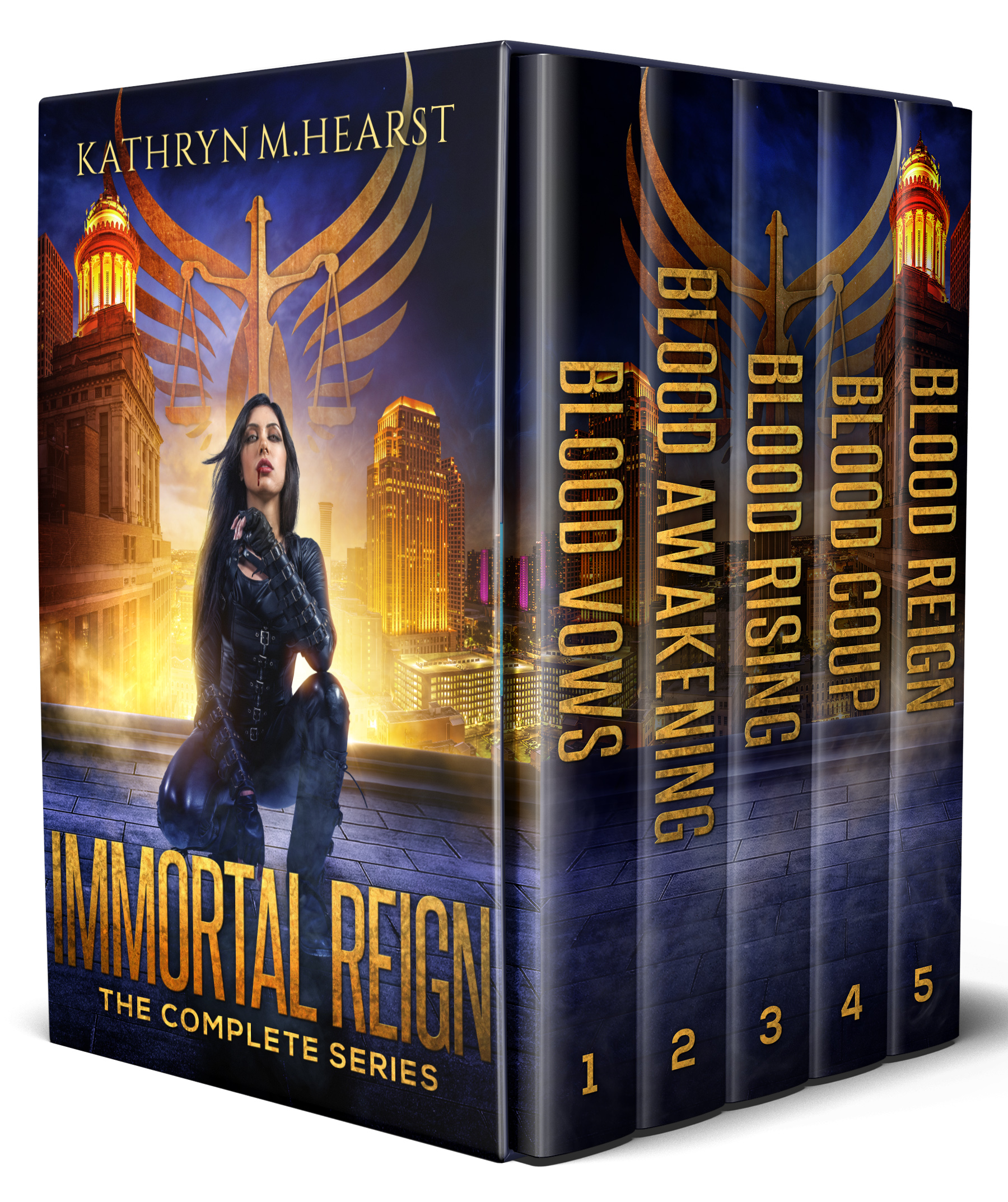